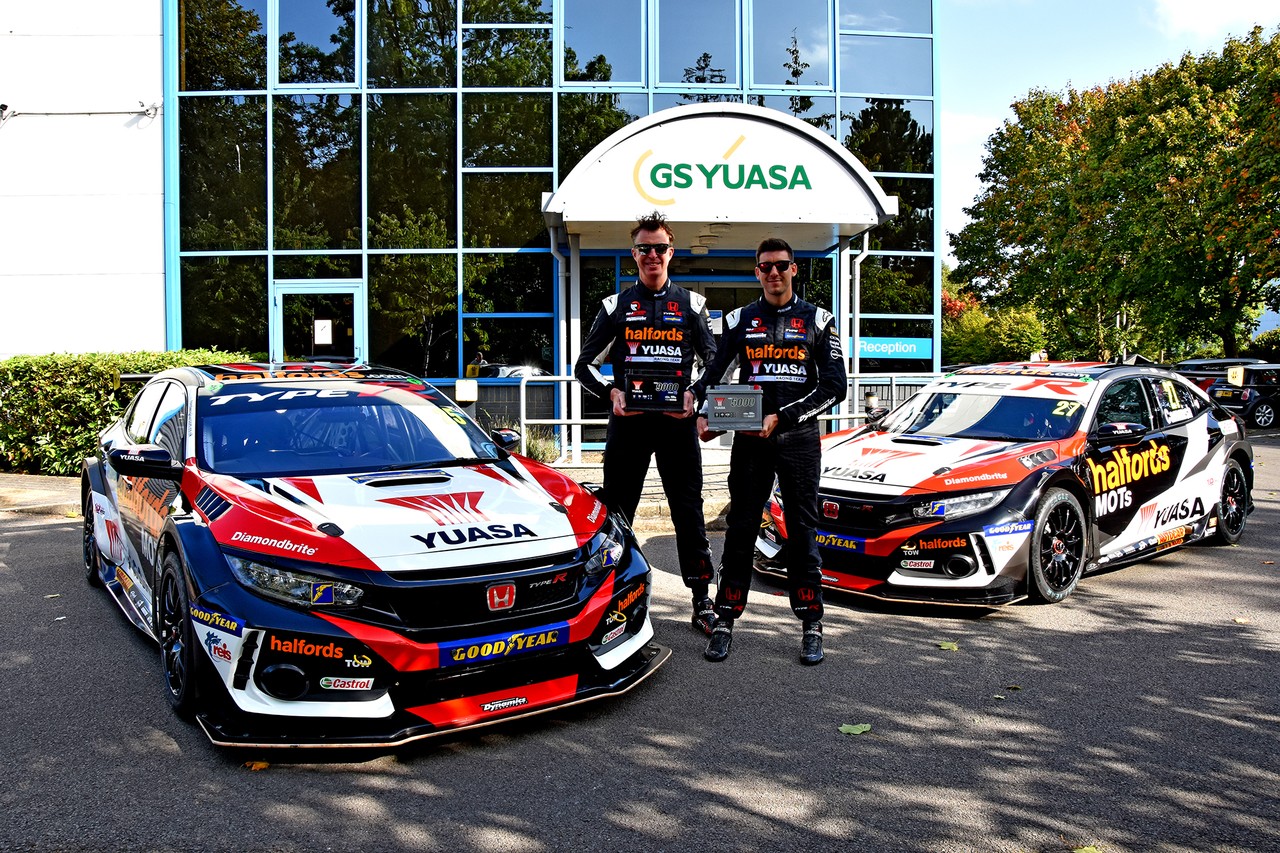 Yuasa are celebrating their 10-year anniversary in the British Touring Car Championship (BTCC) with a special one-off livery and launch of an exclusive competition at their home race at Thruxton this weekend (19 – 20 September).

Halfords Yuasa Racing drivers Matt Neal & Dan Cammish will carry a special livery at Thruxton to highlight Yuasa’s illustrious ten years in the BTCC, one of the longest standing sponsors in the championship and motorsport.

Since Yuasa started sponsoring the works Honda BTCC team in 2010, they have shared together a phenomenal 76 race wins, 214 podiums, 4 drivers’ championships, 5 teams and 5 manufacturers titles.

The design is based on the bonnet of the iconic red and white 2013 Honda Civic FK2, driven by Matt Neal and Gordon Shedden. A car that secured Honda and Team Dynamics both the manufacturers and teams championship that year, whilst Gordon Shedden narrowly missed out on the drivers’ championship. The design is a nod to their successes over the last ten years and is bound to bring back some nostalgia for the long-standing supporters.

In conjunction, Yuasa have also launched an exclusive competition to fans, giving them a chance to win five limited edition 10-year anniversary prints signed by Matt Neal, Gordon Shedden & Dan Cammish. The print is an artistic view of the battery brand’s previous BTCC challengers, looking back at the classic liveries and reflecting on the fantastic success they have shared with the team.

The competition is open to residents in UK and Ireland until the final race at Brands Hatch on Sunday 15 November. There will be one winner after each of the remaining five BTCC rounds.

James Hylton, Managing Director at GS Yuasa Battery Sales UK Ltd said – “We are incredibly proud to celebrate ten years in the British Touring Car Championship with Honda and Team Dynamics. Since our partnership began in 2010, we have enjoyed phenomenal success and many fantastic memories, both on and off the track.

The Yuasa brand has become synonymous with BTCC racing and the works Honda team, it’s been such a big part of our business culture over the last ten years. In that time, Matt, Dan & Gordon have provided some incredible results, claiming a total of 214 podiums. We are very much looking forward to seeing that increase during this very special season.”

Matt Neal – Halfords Yuasa Racing driver and three time BTCC champion added, “We have had a great relationship with Yuasa over the past ten years, they have been massively supportive of our BTCC programme and quite frankly we couldn’t have done it without them. We’ve won four drivers’ championships, five teams and five manufacturer titles, so not a bad point score!

“I have personally raced with Yuasa for that entire time and not only do we have a fantastic working relationship, but also have forged great friendships over that period. We have seen both businesses go from strength to strength and look forward to continuing that partnership long into the future”.

To enter Yuasa’s fantastic competition to win a limited edition 10-year anniversary print signed by Matt Neal, Gordon Shedden and Dan Cammish, simply follow Yuasa on any of their social media accounts, then visit www.yuasa.co.uk/10yearbtcc-win/ and answer a BTCC question.