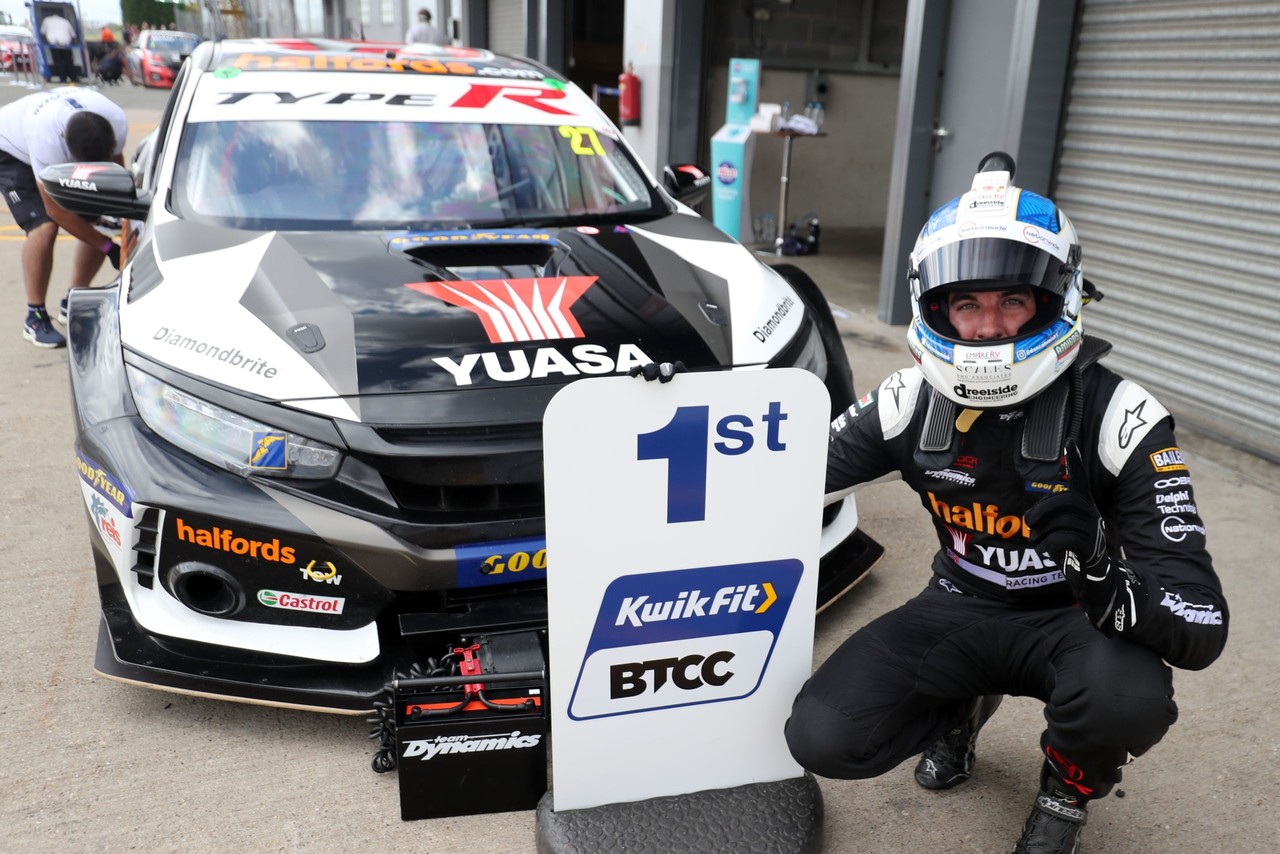 Cammish ended the day just six points off the top of the title race, while Honda leads the manufacturers' championship.Saturday's qualifying saw the Halfords Yuasa Racing mechanics forced into rapid action after discovering an issue on Cammish's car shortly before the session began. They changed the differential in just 15 minutes and Dan rewarded their efforts by securing the outside of the front row, just 13 hundredths behind his main 2019 title rival Colin Turkington. Matt Neal also put in a strong performance to line up his Honda Civic Type R in ninth spot, half a second further back.

s the light turned green for race 1 Cammish was beaten away by the fast-starting rear-wheel-drive car of Ashley Sutton, the Honda man settling into third as Sutton challenged leader Turkington. On lap 4 the two leaders squeezed each other, opening a gap that Cammish happily dived into to snatch the lead.

Not even a late safety-car period prevented a victorious start to the 2020 campaign for Honda, Cammish finally banishing memories of his previous BTCC race last October, when he lost the 2019 title in an accident just 14 corners from the chequered flag. To add to the Halfords Yuasa Racing joy, Matt Neal fought his way up to fifth.

Race two proved more challenging – with his Honda Civic Type R weighed down by 60kg of success ballast, Cammish spun the wheels at the start and Turkington beat him away. The weight then told and the Honda slipped back to finish just ahead of the sister car of Neal.

Sixth and seventh places at the chequered flag earned another useful clutch of championship points for the team, and the same spots on the race 3 grid after the reverse grid draw swapped round the first 12 places.

Following a frantic mid-pack start Cammish had to give best to eventual race winner Sutton but then set about rival Stephen Jelley, the Honda moving ahead at the chicane and Jelley then spinning, promoting Neal. But as the race wore on Cammish was unable to hold back Tom Ingram and eventually finished seventh. Neal was just behind in eighth having held off Tom Oliphant and his team-mate, championship leader Turkington.

The productive day's work saw the Halfords Yuasa Racing team leave Donington with Cammish just six points behind Turkington at the top of the drivers' points, while Honda heads the manufacturers' championship on equal points with its closest rival. But there is little time to enjoy the success, the team heading south to Kent for the second three races in the series at Brands Hatch in just one week's time.


"Race one was brilliant, to start on a high with a win – I always knew Ash would be aggressive with Colin and when he opened up the gap I think he forgot about me, and I took the opportunity.Our front-wheel-drive rivals are very competitive but it’s been a cracking day, I’m second in the points with 40 more than I started with last year. It will be tough going back to Brands, I’ll have a lump in my throat the first time I go through the corner where my title ambitions went last season, but I like the track and the car goes well there – it will be head down and get some more points in the bag."
- Dan Cammish


"A solid day for me, scoring points in all three races. I got a bit stuck behind Dan in the last race, tail-gunning for him which meant I got compromised a bit, but the car was strong and we finished ahead of our main rivals in both race one and three. We have points on the board and both cars in one piece going to Brands in five days' time. The Brands GP circuit is always a favourite for all the drivers because it’s so old school. I think our rivals will be strong but we have a strong car too – the Civic Type R likes fast corners and the GP circuit has a lot of fast stuff out the back."
- Matt Neal