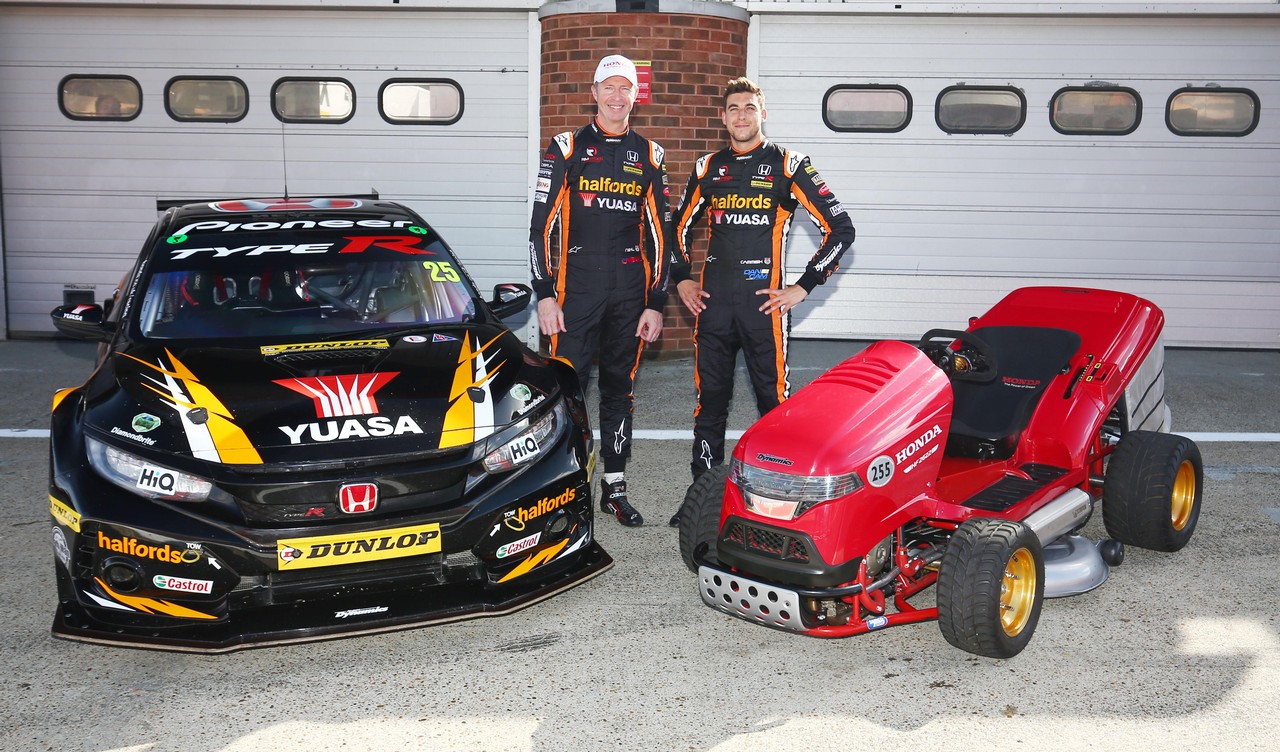 From Formula 1 to touring cars to Superbikes, machinery of all shapes and sizes have turned a wheel on the hallowed racing lines of Brands Hatch’s iconic circuit over the decades but today [30 September] fans attending the Dunlop MSA British Touring Car Championship finale were treated to a lap like never before – by a lawn mower!

Then again, this is no ordinary garden tool – this is the Mean Mower V2, Honda’s extraordinary high-performance interpretation of the humble mower, a machine capable of hitting 150mph as easily as it cuts your garden lawn.

Built by Team Dynamics, Honda’s partner in the BTCC, and powered by a 999cc four-cylinder unit lifted from Honda’s Fireblade SP motorcycle, fettled to produce 190bhp at 13,000rpm, the Mean Mower V2’s motorsport origins arguably make the race track a fitting spiritual home for this show-stopper.

So while the sight of a lawnmower – which retains the traditional look and cutting abilities of a Honda HF 2622 lawn tractor – lining up on the grid was always going to turn heads, it was the Mean Mower V2’s pure power that left spectators awe-struck as professional racer Jess Hawkins hit full throttle.

With a power to weight ratio of 1000bhp/tonne making the world-famous plunge into Paddock Hill Bend an experience like no other and the high-tech Honda Fireblade SP clutch, ECU and six-speed drive train launching a slingshot through Clearways, the Mean Mower V2 gives a fine impression of a race-ready contender.

Built to demonstrate Honda’s breadth of product offering, sporty credentials and reputation as one of the world’s most innovative companies, the second-generation Mean Mower V2 – launched in July – is a true one-of-its-kind icon.

Jess Hawkins
“What an incredible experience! It may not be the traditional way to drive a lap of Brands Hatch, but at the wheel of the Mean Mower V2 it is a lap like no other. It doesn’t take long to discover just how much motorsport DNA has been incorporated into the Mean Mower V2 to create a machine that feels equally as capable of rapid lap times as it does simply cutting the lawn. It’s a genuine – and spectacular – measure of Honda’s ability to utilise its wide-ranging skills for products that are fun whilst continuing to push technological boundaries. I only wish I could have completed more laps!”