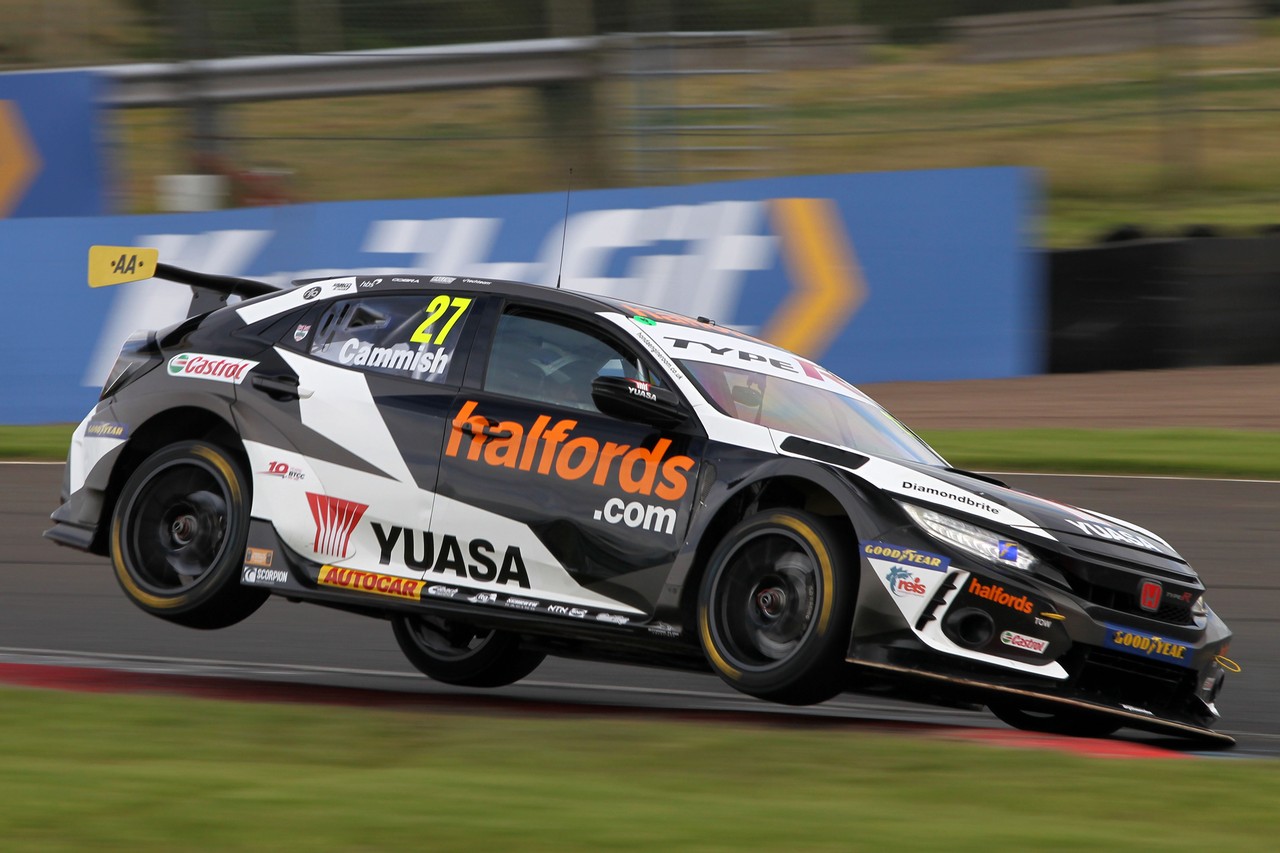 Saturday qualifying on the tight 1.3-mile Fife circuit is always challenging but Dan Cammish found an early gap in the traffic to set a time good enough for fourth grid spot, less than two tenths of a second behind the pole position car of Ashley Sutton.

Matt Neal was also highly competitive until an error exiting the chicane sent him into a heavy impact with the tyre wall. The Halfords Yuasa Racing mechanics set about an overnight rebuild to ensure Neal could take up his ninth start spot on the race 1 grid.

Cammish made a good start and at the end of the first lap dived inside local man Rory Butcher at the hairpin to claim third. But contact from a rival then sent the Honda over the edge of a gravel trap, Dan dropping to sixth where he remained to the chequered flag.

Neal maintained ninth spot in the early laps in his newly rebuilt car, and was then able to pick off rivals Aiden Moffat and Mike Bushell to finish the first race just behind his team-mate.

At the start of race 2 Cammish held onto his sixth place and then ascars clashed ahead of him the Honda man seized the opportunity to grab fourth. He then repeatedly challenged Tom Ingram for the final podium spot but was unable to find a way past.

A determined performance from Matt Neal saw the BTCC veteran fight his way up the field to again finish just behind his team-mate in fifth. But his weekend then took another challenging turn when he was judged to have made a false start. The resultant 10-second penalty dropped Matt to 15th.

The reverse-grid draw for the final race put Cammish into eighth starting spot and he held his place through the first lap. Neal, coming through the field from 15th, just avoided a major accident that left two wrecked cars in the middle of the track and brought out the red flag.

On the restart Cammish again got away well and was able to overcome rivals Jake Hill and Chris Smiley to finish sixth. Neal, meanwhile found himself in a frantic multi-car midfield battle, making up three places to finish 12th and earn potentially vital points for the Honda team.

Following a frantic start to the delayed 2020 season with 12 races in just five weekends, Halfords Yuasa Racing will now enjoy a welcome three-week break before the next rounds at Thruxton on 20th September.

The Honda team has enjoyed its strongest success record at the fast Hampshire track, scoring 12 victories there since 2011 including a memorable day in 2013 when all three races were taken by the team. Dan Cammish won at Thruxton last season and he and Matt Neal will be keen to add to the victory record and maintain their championship challenge.


"It's been quite a good day actually – we were consistent and scored points in every race, and I could have made the podium in race one had I not been knocked wide onto the gravel. I'm looking forward to going to Thruxton – it's a good track for us and I took a win there last season."
- Dan Cammish

After my little off in qualifying the Halfords Yuasa guys did a great job to rebuild the car overnight and it felt great today. Obviously race 2 was disappointing, I was penalised for being marginally out of position on the grid, which was especially frustrating as it's so difficult to overtake around here if someone drives a tight line. Still, points finishes in all three races for both cars is a good record, and now we go on to Thruxton where we always run well."
- Matt Neal