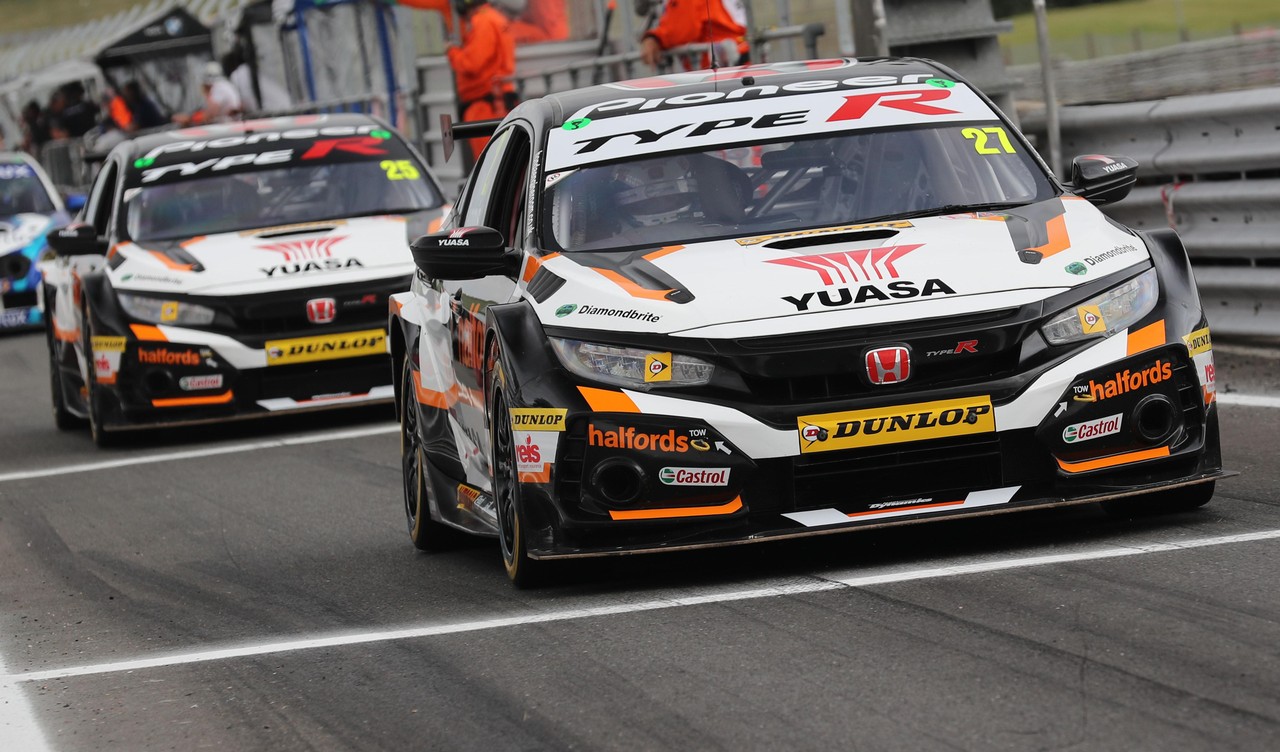 The Snetterton meeting served up a new challenge, drivers required to use a different compound tyre in each of the three races. Cammish chose the soft tyre for race one, Neal the hard, but Matt's race lasted little more than a lap before a clash with rival Ollie Jackson damaged the Civic Type R and put it out of the race.

Cammish, meanwhile made an excellent start, matching pole-sitter Tom Ingram and slotting into second spot. The pair remained in close proximity for the whole of the 12 laps, the Honda always in touch with the leader. Cammish took second at the flag, banking a good haul of points.

The two Hondas lined up at opposite ends of the grid for race two, both now on the medium-compound tyre. Cammish, his car weighed down by the ballast resulting from his first race success, was beaten off the line by both Ingram and championship leader Colin Turkington, and then forced to drop to fourth behind Andrew Jordan.

However Ingram then hit a problem and as he slowed an opportunistic Cammish rounded his rival and retook Jordan in the same move, the Civic Type R then holding onto second spot to the chequered flag.

Starting 30th, Neal was looking to charge through the field as he had in the previous BTCC meeting, but his task was made no easier one lap in when his Civic Type R was forced across the grass to avoid a spinning competitor. The frustrated Halfords Yuasa Racing driver progressed to 16th at the flag, still too far back to benefit from the reverse grid draw for race 3.

The draw placed Cammish seventh on the grid for the final encounter, his Honda now on the hardest tyre. Unfortunately the car's pace was held back by some braking issues and he slipped back to an eventual 15th-place finish, grabbing a single championship point.

Neal made the most of the soft-compound tyre to again charge up the grid from 16th, only to again be badly delayed by another car's spin. Resuming he fought back to finish 11th and also earn some possibly vital championship points for the Halfords Yuasa Racing team.

The BTCC now moves to Thruxton in Hampshire for its second visit of the season on 18th August. Both Hondas were on the pace at the meeting in May – Neal will be hoping to find some luck to go with his speed, and Cammish will be looking to continue his strong run and make one further step to the top of the podium.

We were fast all weekend – our pace during the test converted into a great qualifying performance, and a great race 1 and 2. In the second I really punched above the weight of the success ballast to take second place. It was a shame race 3 didn’t go to plan but I struggled with some brake problems which we hadn’t seen before. Brake problems are not good in a Touring Car race! But, lots of positives!

I'm looking forward to going back to Thruxton, we know we go well there and I’m sure we will be at the front.

The car felt good all weekend. We took a gamble on the hard tyre in race 1 which proved a good move but then I was speared off the track. When you are coming from the back it's a lottery and I lost out to other people's problems. The positive is that the car was good and strong all through.

Thruxton has always been a bit of a happy hunting ground for us, so we are looking forward to going back there.