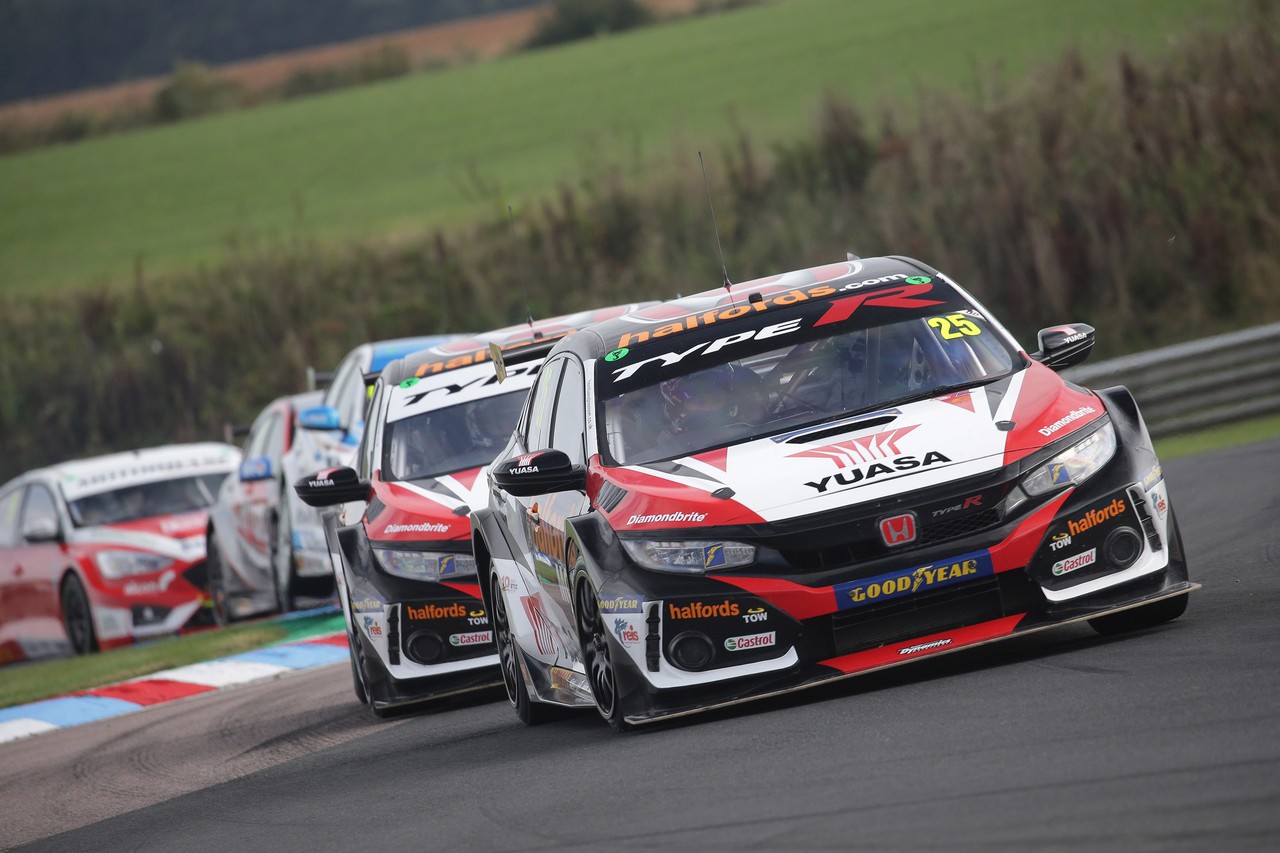 Honda British Touring Car Championship drivers Dan Cammish and Matt Neal enjoyed one of their strongest performances of the season as the series reached its halfway point at the fast Hampshire circuit of Thruxton, both drivers twice climbing the podium and in the process securing a pair of manufacturer prizes for Honda.

With the two Honda Civic Type R race cars wearing a one-off livery celebrating battery supplier Yuasa's 10th season with the team, Dan Cammish made a statement of intent by topping the times in both practice sessions and then taking pole position with a 112mph lap. Matt Neal produced his best qualifying performance of the season to line up third, less than two tenths of a second off the fastest time.

Front-row rival Tom Ingram beat Cammish off the race 1 line, Neal slotting in behind his team-mate. The top two quickly established a gap on the opposition, and in the closing laps Cammish closed in on Ingram but couldn't quite force his Honda past, finishing second. Neal meanwhile held off Adam Morgan to take third place, his first podium finish of 2020.

Race 2 marked the halfway point in the delayed and compressed 2020 BTCC. Cammish was again beaten away, dropping to third behind Neal, but he retook the place from his team-mate at the end of the lap and set off after race leader Ingram.

Again Cammish was able to pressure the leader without finding a way past, though on the final corner the Honda pulled alongside its rival before having to give way and again finish second. Neal withstood initial heavy pressure from championship leader Ashley Sutton to maintain his third spot and earn Honda its second manufacturer award of the day.

The reverse grid draw for the final race put Neal and Cammish in sixth and seventh spots. More start issues dropped Cammish to 9th off the line, and then a side-by-side battle with leading title rival Colin Turkington saw the Honda lose momentum and fall to 12th.

Cammish fought back to claim 10th at the flag and some possibly vital extra championship points while Neal slotted into seventh at the start and held it right through the race, the veteran driver climbing back into the championship top 10 and in the process securing a Teams award for Halfords Yuasa Racing.

A strong day had helped Cammish trim the points deficit to the championship leaders, while Neal continued a remarkable success record at Thruxton – since 2002 he has climbed the podium at the Hampshire track 32 times in total and at least once in every season.

There is little time to enjoy the form however as the championship reconvenes in just a week's time at Silverstone.

"I had a day of terrible starts, which was a shame. In the first two races I found I could catch Ingram but he had enough traction that I couldn’t make enough difference in the slow corners to take advantage in the quick ones. We both gave it everything – there was nothing left in the tank for either of us. Then in race 3 I got beat up a bit, I survived and earned points but I would have liked a few more.
Pole and two seconds along with Matt’s double-podium alongside me is a great result from the day. Now we go onto Silverstone with the car and the engine working well and there’s no reason why we can’t have another successful weekend."

"You are hanging on here wherever you are in the pack, so we are over the moon to have both cars on the podium in two races, and I'm of course delighted to continue my record here.
It was a strong weekend on Yuasa’s 10th anniversary, the win eluded us but I’m feeling pretty bullish for Silverstone and looking forward to it – the engine’s working well, as are the aerodynamics, we just need a bit of luck and speed in a week’s time."