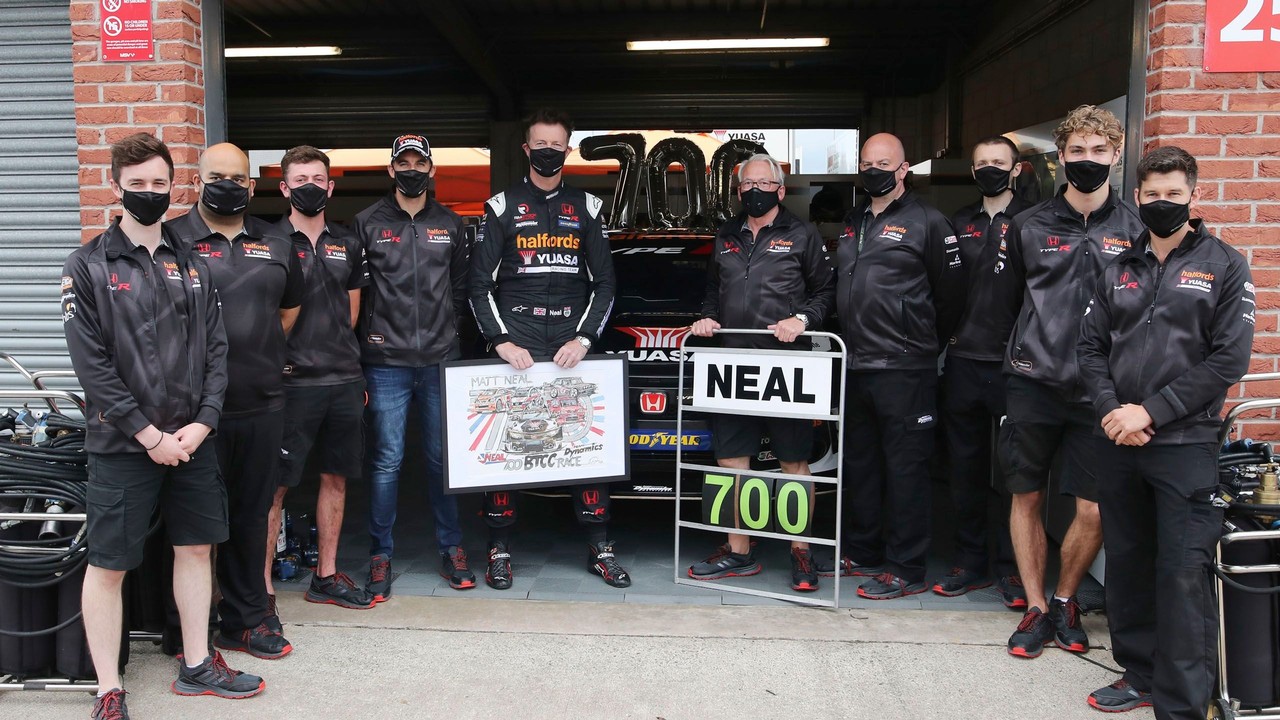 Frustration beset the Honda British Touring Car Championship team in the third meeting of the season at Oulton Park on Sunday (23rd August). Dan Cammish kept up his record of making the podium at every meeting in 2020 with third in race one, but both he and team-mate Matt Neal suffered poor luck in the later races to hit their title bid.

Qualifying on Saturday was held in changeable weather conditions and Matt Neal proved faster of the two Halfords Yuasa Racing drivers, on a weekend when he would celebrate his 700th BTCC start in a career stretching back to 1991. With his Honda Civic Type R wearing the number 700 for just this weekend Neal took fourth on the grid, just quarter of a second behind top qualifier Rory Butcher and with Honda team-mate Cammish alongside in fifth.

Heavy rain just before the start of race 1 saw the entire field rapidly changing from slick dry to treaded wet tyres. Cammish outdragged his team-mate off the line but was beaten away by rival Tom Oliphant. Dan quickly recovered to overcome both Oliphant and his team-mate, championship leader Colin Turkington, and the Halfords Yuasa Racing man then held off the independent Honda of Jake Hill to score a podium finish in third. This then became second when the car of race-winner Josh Cook failed post-race technical checks.

Sadly Neal's excellent qualifying performance counted for little when his poor luck returned, a technical issue dropping the Honda Civic Type R down the field. Matt's 700th BTCC start in the second race of the day would be from 25th on the grid.

The track was still wet but drying for race 2 and while Cammish again made a strong start to chase after pole-sitter Rory Butcher, the conditions increasingly favoured the rear-wheel-drive cars of rivals Ash Sutton and Colin Turkington. Passed by Sutton with four laps down, Cammish held off Turkington for several laps. But then a slight mistake with just two laps to go dropped the Honda to a still strong fourth-place finish.

Neal staged another of his comeback drives through the field, climbing 11 places but just failing to produce a memorable result to his 700th race – his 13th place finish was just short of contention for promotion in the reverse-grid race 3.

The grid reversal put Cammish on seventh grid spot for the final race, with lead title rival Turkington alongside. But race 3 unfortunately proved one to forget for the Honda team as both drivers fell victim to opening lap incidents, Cammish dropping to 17th and Neal forced to pit with a puncture. Finishing positions of 15th and 24th was poor reward for the pace of the two drivers.

The Honda team will have little opportunity to brood after the trying day, however, as for the second time this season the BTCC stages meetings on successive weekends. The series heads north to Scotland for rounds 10 to 12 of the BTCC at Knockhill on 30th August.


"A frustrating day – I was pleased with my third in race one after starting fifth, going forward is always good especially in such challenging conditions, and I don't think I quite had the speed to challenge for the win. Fourth place in race two earned me some solid points but sadly it all went wrong in the final race. But you can't let such things get to you – I'm focusing now on Knockhill, a really great track where you have to be brave to overtake."
- Dan Cammish

"Firstly thanks to everyone for the celebrations around my 700th start, I must admit I hadn't been counting them! I'm only sorry I wasn't able to bring home better results on such a milestone day, especially after such a strong qualifying pace. Still after so long in this series I know that you get straight back up and go again. I love Knockhill, I've taken four wins for Honda there before and I want more!"
- Matt Neal