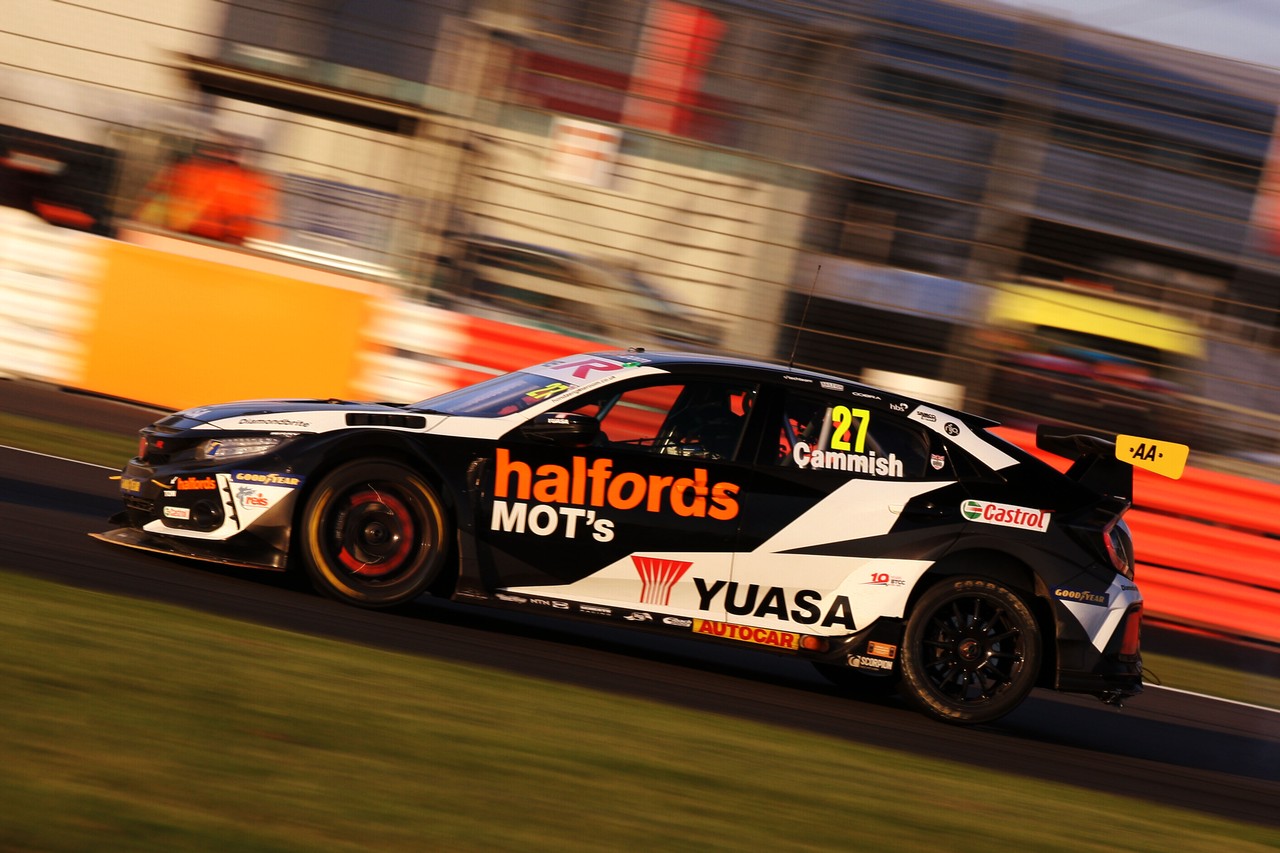 Honda driver Dan Cammish enjoyed the strongest weekend of his British Touring Car Championship career at Silverstone, with a trio of top-four finishes, including a win, sending him and Honda up the points table.

The Halfords Yuasa Racing team had high hopes for qualifying after their two cars topped the times in final practice, and Dan Cammish delivered in style. Ignoring spots of rain he took his Honda Civic Type R to a second successive pole position and by the largest margin of the season, his 103mph lap smashing the Silverstone qualifying record. Matt Neal's recent form continued too as he secured sixth grid spot, less than three tenths behind his team-mate.

Cammish made an excellent start to race 1, out-dragging front-row rival Tom Ingram into the first corner and holding him off for the first four laps. Ingram then found a gap, the two crossing the line side-by-side just as the safety car came out to clear an accident.

Having been ahead across the line, though by less than the width of his Honda's front splitter, Cammish restarted in first. He was then able to edge out a gap to Ingram, scoring his and the Halfords Yuasa Racing team's third victory of the season.

Neal meanwhile was caught up in a frantic midfield battle, being half-spun by a rival at one point and dropping to 10th. But he fought back to eighth at the flag, securing the manufacturers' award for Honda.

Despite his car carrying maximum success ballast Cammish again led away in race 2, but was passed by Ingram at the end of the lap. The Honda driver held off championship leader Colin Turkington for several laps before being forced down to third, which turned into a second-place finish when leader Ingram suffered a puncture with just a lap to go.

Neal also had a strong race, fighting his way up the field to finish fourth and add to a strong points haul for the Halfords Yuasa Racing team.

The reverse grid draw for the final race put Neal and Cammish into sixth and eighth starting spots and at the start Neal initially dropped to seventh and Cammish 10th. But with six laps down Neal and rival Rory Butcher made contact and Butcher's car was launched into a violent accident. He escaped unhurt but barrier damage caused the race to be red-flagged.

Cammish made an excellent restart to quickly move ahead of his team-mate into fifth. He then joined a remarkable five-car battle for the lead that lasted for the rest of the 12 laps, the Honda man finishing fourth to complete an excellent day and put himself firmly back into the title battle.

Neal meanwhile was involved in no less frantic a midfield battle, completing his dramatic race in 11th spot to secure the Teams Award for Halfords Yuasa Racing's performance over the weekend.

After a strong weekend the Honda team now heads to Croft in Yorkshire on 11th October, with Dan Cammish holding a firm third place in the title race, just 17 points behind the leader.

"I believe that’s the best Touring Car weekend of my career – pole, new lap record, first, second, fourth. We’ve had a stellar weekend which I didn’t expect coming here as I’ve always found Silverstone a little bit tougher. But I’ve learnt from Matt, from what he can do round here and I got the results. My starts were fantastic and the speed in the car was good. The team has given me such a good car all weekend, massive thanks to them."