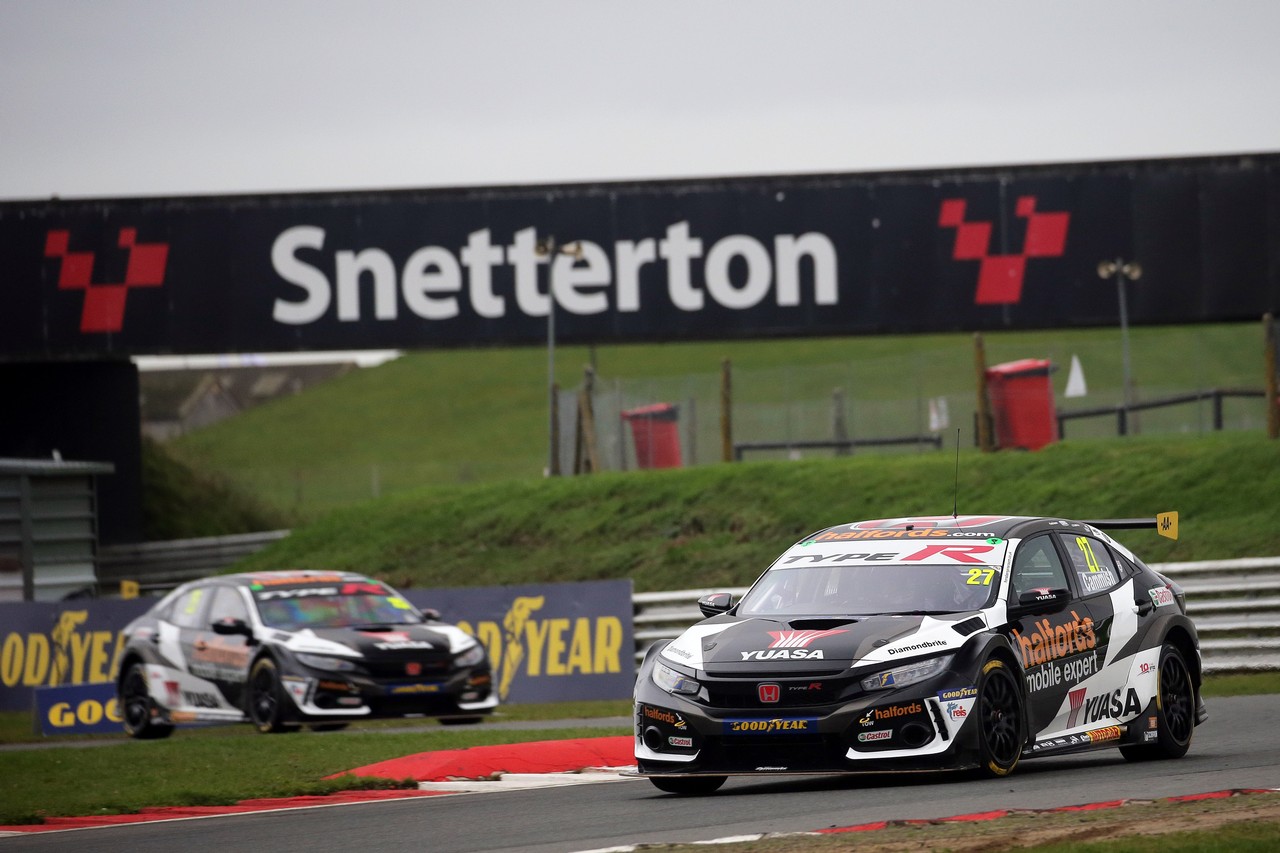 Honda British Touring Car Championship drivers Dan Cammish and Matt Neal endured a tough day at Snetterton today (25th October), suffering for pace at the chilly Norfolk track. But they will now head for the series finale at Brands Hatch in three weeks' time determined to stage an even bigger comeback than in 2019, when Cammish came so close to snatching the title.

The Covid-delayed 2020 BTCC saw the teams at Snetterton three months later than usual, facing a tricky combination of much colder track temperatures and a new two-part qualifying session. Dan Cammish just made it into the pole shoot-out with 10th fastest time but could only set one quick lap in the 10-minute session, qualifying fifth, while Matt Neal missed out on the shoot-out with a late spin, putting him 16th on the race 1 grid.

Cammish's Honda Civic Type R made a good start to race one on a damp but drying track, the Halfords Yuasa Racing man avoiding spinning cars at the first corner to emerge in fourth spot. However he then struggled for outright pace and was unable to prevent rivals Rory Butcher and championship leader Ashley Sutton going past. The Honda finished the race in sixth, seven places ahead of Matt Neal who had also struggled for speed on the tricky surface.

Cammish repeated his good start in race two and found himself on the tail end of a four-way battle for second place. But with all four cars equally matched the Halfords Yuasa Racing man could not force the Honda past his rivals. Then into the final corner he was delayed avoiding the sideways car of Rory Butcher and Jake Hill seized a chance to out-accelerate the Honda into fifth at the flag. Neal also spent the entire race in a close battle with Tom Oliphant and Senna Proctor, but was forced to settle for a 12th-place finish.

The reverse grid draw for the final race put Cammish into fifth grid spot, ahead of both his closest title rivals. However a further strong start was rendered meaningless on the first lap when contact with Josh Cook sent the Honda into a half-spin and down to ninth. Cammish fought back in a frantic midfield pack but was unable to climb higher than sixth, finishing behind both his title rivals. Matt Neal completed a tough day for Halfords Yuasa Racing with a 13th-place finish.

Despite disappointment in Norfolk, Cammish remains in the title hunt as the series moves to its finale at Brands Hatch in Kent on 15th November. While he is 25 points back on the lead, more than 60 points are available from the three races and having come so close to taking the title in 2019, the Honda man will know he still has a chance of victory.

"This was a tough day – our chassis was good but we seemed to have lost a little straight-line speed which made life difficult, and then in race three I got beat up a bit early on.
Last year I went to the Brands final 16 points back and came so close to taking the title. This year it's a bigger points gap but I have to get stuck in and stay positive – it's not over yet."