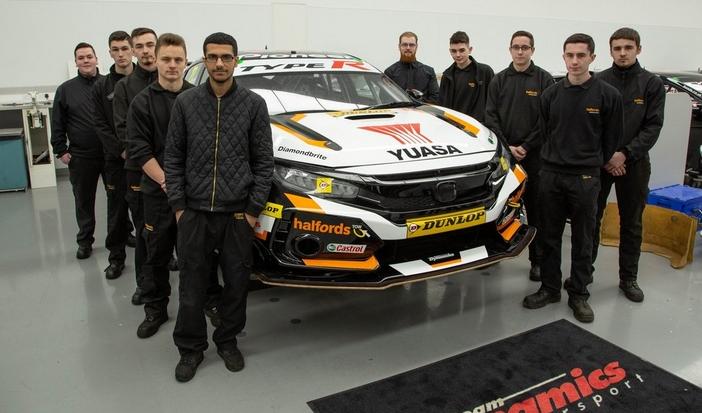 A young Halfords Autocentres apprentice from Hartlepool has fought off competition from across the country, to be named Halfords' BTCC Apprentice Competition winner 2019.


18-year-old Josh Hall came out on top in the finals, after battling it out with more than 60 2nd & 3rd Year Halfords apprentices from around the UK, to be chosen to join Halfords Yuasa Racing Team in the British Touring Car Championship (BTCC) for 2019.

The young contestants, who faced a tough selection process to reach the finals of the competition, had to solve technical problems on a road car, under timed conditions, to test their mechanical knowledge and skills.

They were then put under intense presure by team boss James Rodgers in an interview, before the judges made their final decision.

Now, he is preparing to swap his work uniform for race overalls this summer. As part of his placement, he will join the team at every race track in the BTCC calendar to support the crew as they prepare the car for races and ensure it performs at its best on race day.

After being announced the winner Josh said: "It feels amazing to have won, it's an opportunity that I will seize, and we'll see where the future takes me. I was a little bit surprised to have won, I just gave it my best shot and I've obviously done something right. I think this experience will open so many doors."

James Rodgers Halfords Yuasa Racing team boss said: "This was a really challenging day for the apprentices, as well as testing their skills we were looking for the right sort of personality who would gel and fit in with the team. As a race team we work in a very high pressure environment, everything is timed, is we needed someone who can handle that. Josh should be really proud of himself, he's stood out amongst some really good apprentices."

Halfords Autocentres Head of Quality and Training Andy Turbefield said: "The standard this year was incredibly high, and all apprentices who reached the finals are winners in their own right. Josh had both the technical ability and the personality to fit in with the team and we can't wait to see him progress."

Now in its third year, the Halfords BTCC apprentice competition has been hugely successful, with a Halfords Autocentres apprentice experiencing being part of a race team each summer, and some continuing on to a career in motorsport.


Halfords Autocentres has also recently announced a new five-year plan for apprenticeships, which aims to respond to the challenges of the growing demand for hybrid and electric cars in the UK, and the country's scarcity of automotive skills.

The garage network is aiming to take on 100 new apprentices each year and place an apprentice in every Autocentre - to tackle a skills shortage in the industry.